For today’s blog post, we checked in with the director of Disaster! as the cast and crew put the finishing touches on the production.  See what Megan Wilkins had to say.

I want to say what an honor it is to be able to direct the first show of the 90th season! It has been so much fun and a lot of hard work. Going from previously being Assistant Director and Choreographer to being able to direct my first mainstage show, has been such a blessing! I couldn’t have asked for a better cast and crew to go along this journey with me. When I set out to start the show, I wanted to make sure that rehearsals were as much fun for the cast as possible and every night had a purpose.

This is one of the most talented group of individuals I’ve been given the opportunity to work with. Everyone has been working extremely hard to bring these characters to life and I can’t wait for the audience to see and hear them sing! With songs like “Hot Stuff,” “I’d Really Love to See You Tonight,” Knock on Wood,” “Hooked on a Feeling,” “Still the One,” “I Will Survive,” and many more, I guarantee you will love it. This comedy is sure to have the audience laughing in their seats.

Tickets for Disaster! are on sale now.  The show opens next week!

Last night, the cast and crew of Disaster! got to meet and rehearse with an essential part of the show, their orchestra.  Music director Vickie Krutzer opened her home to the actors and musicians to practice together before these talented instrumentalists move into the pit for the show.  The cast had a wonderful time singing these tunes, including “Knock on Wood,” “Hot Stuff,” and “Hooked on a Feeling.”  In an exclusive sneak peek, check out a snippet of the cast performing “Sky High” below.

To hear these songs and many more hits just like it, buy your tickets for Disaster! today!  The show opens to our patrons on September 16th and to the public September 17th with a two weekend run.  Do not miss out on the first production of our fantastic 90th season.

Auditions for our second production of the season have been announced!  Directors Cassey Bernstein and Moira O’Connor are looking for a large cast of comedic actors for the fast-paced, witty classic The Man Who Came to Dinner.

For auditions please prepare a 1 minute monologue in the style of the show. The show is a fast-paced comedy with witty dialogue and quick banter. It is based in the 1940’s.  If you have any questions, please contact one of the directors or Donna at the box office.

A list of characters can be found on our Auditions page.  Join the Facebook event to ensure you don’t forget!

Last night, the cast of Disaster! finished their first full run-through completely OFF BOOK!  WOW!  The cast is working diligently to make our opening production one to remember.  In this sneak peek, Marianne (Dwedee Kobbah), Chad (Benjamin McQuillin), and Ted (Nathaniel Jeane) confront their inner demons while performing Morris Albert’s one-hit wonder, “Feelings.”  Will they move on from their pasts, or will they become victims of the disasters that await them?  You’ll have to secure your seat and find out for yourself!

The cast is hard at work today perfecting a show-stopping dance number to “A Fifth of Beethoven.”  They have been working incredibly hard to make this season kick off with a bang!  Don’t miss Disaster!, hitting the stage this September.  Get your tickets today!

Rehearsals for Disaster! are underway on our mainstage.  After a week of singing with music director Vickie Krutzer and a week of dancing with choreographer Scot Baronet, the cast has hit the stage to begin blocking Act 1.  Dance numbers, scene changes, and moving set pieces fill the first act, and director Megan Wilkins is leading the charge.  We’re confident that Disaster! will be anything but a disaster.

In this sneak peek, Chad (Ben McQuillin) flirts with a female passenger (Darian Hodge) while the other passengers enjoy a performance of the Bay City Rollers’ “Saturday Night” performed by Jackie Noelle (Emily Stogner).

Tickets for this show will be on sale soon, but you can still become a member TODAY!

For 90 years, generations of dedicated actors, directors and volunteers have presented the joy of live theatre in Monroe. To celebrate its 90th anniversary, Strauss Theatre Center will host a ribbon cutting at 4:30 p.m. August 17 on its stage at 1300 Lamy Lane.

Originally organized as the Community Players, the group performed The Whole Town’s Talking as its first play in July of 1932 at the Grand Street Theatre. Over the years, the little theatre performed on various stages across Ouachita Parish until Clifford Strauss gave a $50,000 match donation through the Carolyn Rose Strauss Foundation. Those funds led to construction of the current location of the theatre, which was completed in April 1961. Through multiple wars, natural disasters and a pandemic, the people of northeast Louisiana made the performing arts a priority at Strauss Theatre. It is the oldest, continuously operating community theatre in the state.

The 2021-22 season will feature five main stage productions, including Disaster!, The Man Who Came to Dinner, Nunsense, The Odd Couple: Female Version, and Company. Strauss Theatre is a nonprofit organization, and hundreds of Louisianans dedicate countless hours on stage, behind the curtain, in the orchestra pit and in the box office to create the magic of live theatre.

All are invited to attend the ribbon cutting and to join the theatre as a member. Patrons can purchase memberships at the box office or online at strausstc.com. A special 90th anniversary membership level of $90 gives attendees tickets to three shows of their choice. Purchase a membership here.

Our final show of our 90th season is Stephen Sondheim’s Company. Premiering on Broadway in 1970, this musical comedy was nominated for a record-setting 14 Tony Awards and took home six. Company features some of Sondheim’s most well-known and acclaimed songs such as “Getting Married Today,” “Being Alive,” “The Ladies Who Lunch,” and its titular track “Company.”

On the night of his 35th birthday, Robert struggles to think of a wish to make as he blows out his birthday candles. The lone bachelor, surrounded by “those good and crazy people” — his married friends — Robert is uncertain whether he should simply be happy with his lot or whether he should wish for his own romantic partner. Over a series of dinner parties, first dates, and thoughtful conversations, Robert attempts to understand the pros and cons of marriage from his diverse and frequently hilarious friends and begins to make sense of his own persistent bachelorhood.

In addition to Robert (or Bobby, Bubbi, darling, or baby depending on who you ask), audiences are treated to a cast of lovable characters. Married couple Sarah and Harry are a foodie and alcoholic who have each recently given up their vices. Former Ivy Leaguer Peter and gracious Southern belle Susan are the picture-perfect couple…and getting a divorce. Uptight Jenny and chic David are high on Robert’s list of friends. Paul and his neurotic fiancé Amy bring an entertaining dynamic when their wedding day arrives. Cynical Joanne and her third husband Larry provide Robert with an older perspective. Finally, Robert’s trio of girlfriends, the naïve April, hip Marta, and small-town Kathy, round out the cast.

The original 1970 production starred Broadway veterans including Larry Kert, Elaine Stritch, and Donna McKechnie. The musical returned to Broadway in the Boyd Gaines-led revival in 1995 and again in 2006 starring Raúl Esparza. The show found a new audience after the 2011 New York Philharmonic Concert. This cast featured stars of stage and screen like Neil Patrick Harris, Marth Plimpton, Stephen Colbert, Jon Cryer, Christina Hendricks, Anika Noni Rose, and Patti LuPone. LuPone is set to reprise the role of Joanne in the 2022 revival starring Katrina Lenk as a gender-swapped Bobbie.

Last night, Strauss Theatre Center welcomed volunteers and community members to celebrate the 2021 Christopher Awards! The night was filled with music, dancing, and a special look into next season’s shows.

16 awards were presented to the casts and crews of shows from our 88th and 89th seasons.  Check out the winners below!

Congratulations to all of the winners and thank you to all of the nominees and volunteers for your hard work.  We can’t wait to see you all back for our 90th season! 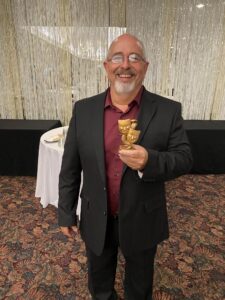 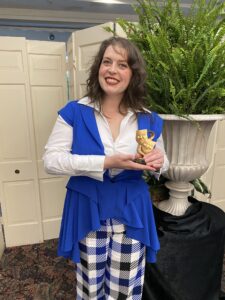 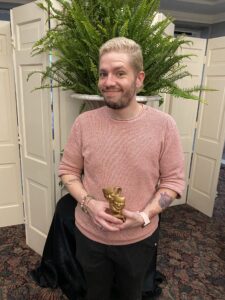 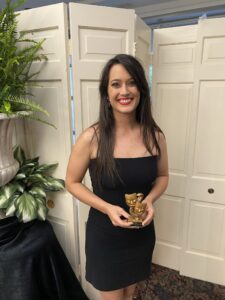 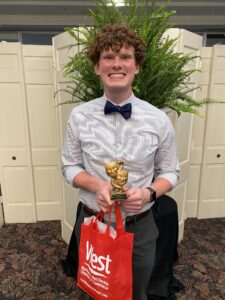 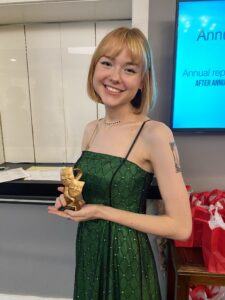 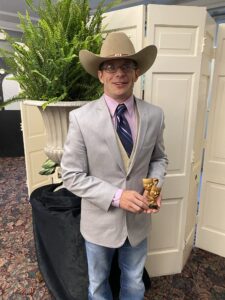 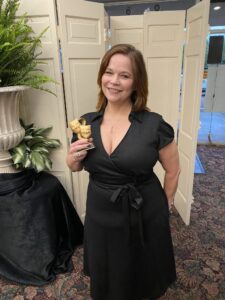 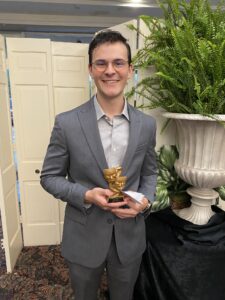 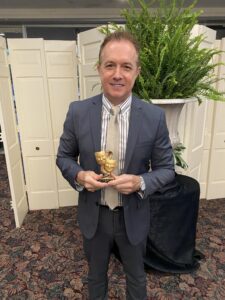 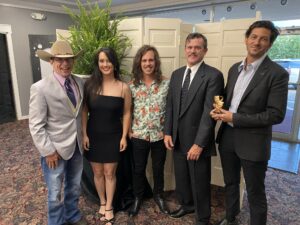 Tomorrow night we celebrate the hard-working volunteers who made our 88th and 89th seasons possible with our (usually) annual Christopher Awards!

Volunteers, patrons, and members of the community are invited to join in on the fun as we honor the actors and creatives who brought eight fantastic shows to life on the Strauss mainstage, in Kiroli Park, and virtually amidst live audience restrictions. We are very excited to welcome everyone back as we close one chapter and kick off our 90th chapter!

Who will take home a coveted Christopher Award?  Find out Saturday, June 26th at 7PM.  Cocktail attire is preferred.