Our second show of the season is the classic comedy The Man Who Came to Dinner by Moss Hart and George S. Kaufman.  Making its Broadway premiere in 1939, this play has continued to entertain audiences for decades.

The Man Who Came to Dinner centers around the famously outlandish New York City radio wit Sheridan Whiteside (‘Sherry’ to his friends). Upon arrival to the home of Ernest W. Stanley and his family in Mesalia, Ohio, Sherry slips on a patch of ice outside the Stanleys’ front door and injures his hip. Confined to the Stanleys’ home for a month, Whiteside proceeds to wreak havoc on the lives of his hosts. A rotating cast of colorful characters find themselves in Sherry’s presence including Dr. Bradley, the absent-minded town physician, the eccentric Professor Metz and his glass-encased cockroach colony, and the glamorous and loose-living actress, Lorraine Sheldon. Sherry’s attempt to thwart a love triangle causes a series of additional schemes that eventually leads to someone getting trapped in an Egyptian mummy case.

The play also found success through its film adaptation starring Woolley, Bette Davis, and Ann Sheridan in 1942. Woolley also starred in the first radio adaptation in 1942.

We’re excited to kick off our 90th season with the jukebox musical comedy Disaster! by Seth Rudetsky and Jack Plotnick.  Earthquakes, tidal waves, infernos and the songs of the ’70s take center stage in this comedic homage to 1970s disaster films.

Disaster! takes place in 1979 Manhattan during opening night of the Barracuda, the first floating casino and discothèque in New York. The characters gather to gamble and dance, unaware of impending natural disasters, and the building’s lack of safety measures compounds these catastrophes. Notably, the casino’s structure was built on a fault line, which causes earthquakes throughout the show. The plot follows several characters’ dynamics and interactions throughout the opening night as they deal with various plot elements reminiscent of 1970s disaster cult films such as The Poseidon Adventure and Airport 1975.

Calling all singers, dancers, and disco enthusiasts!
Auditions for our first show of the season, Disaster!, are set for July 10th and 11th. 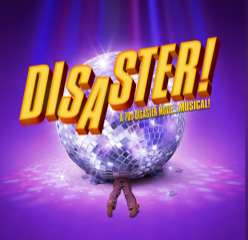 Anyone interested in auditioning is asked to prepare 16 bars of either a song from the show or a song from the 70’s-80’s.  Please bring sheet music for the accompanist.
A short piece of choreography will be taught at the audition.  We want to see you having fun, so don’t sweat it!  Bring some comfy clothes and shoes, water, and a great attitude.
Finally, we will be doing cold reads from the script, so you will not need to prepare a monologue.

Music and dance auditions will take place on Saturday the 10th from 10am-12pm, and cold reads will take place on Sunday the 11th at 6pm.  If you are unable to make a date and want to audition, please call the box office and talk to Donna.  You may submit a self-taped audition with singing, dancing, and a monologue.

For character descriptions, songs, and more information, head to our Auditions page!  To learn more about Disaster!, click here. 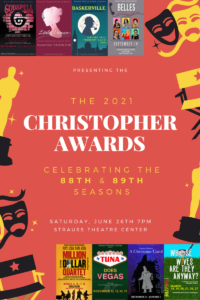 After a tough year, it’s time to celebrate the hard work and talents of our amazing volunteers!  We’re happy to announce and invite you to the 2021 Christopher Awards honoring both the 88th and 89th seasons.  We had 8 stellar productions featuring countless actors, singers, dancers, musicians, designers, painters, builders, directors, backstage crew, and house staff all volunteering their time to bring continuous live theatre to Monroe.  Through the power of technology and some incredible luck with the weather, we were able to provide shows virtually and even produce an outdoor musical.

Strauss Theatre Center is excited to announce our REVEAL Virtual Event, where we will announce our shows of our 90th season of continuous live theatre!

This past year has been an unusual and difficult one for Strauss, with several shows facing cancellation, postponement, or change of venue due to the coronavirus pandemic. As the world begins to return to normal, we are excited to bring live local theatre back to Monroe and Northeast Louisiana! Join us this Sunday, May 23 at 5PM CDT as we REVEAL the five shows we have planned for our upcoming season.

Be sure to check back at StraussTC.com for more information about our upcoming shows. We can’t wait to see you again at the theatre!

Strauss Theatre Center is holding auditions for the first show of 2021, Whose Wives Are They Anyway?, on January 10th and 11th. Director Terri Larson Cunningham is looking for 8 adult actors, 5 female and 3 male, for this fast-paced farce.

Auditions will be held at Strauss Theatre Center on Sunday, January 10th from 5pm-9pm and on Monday, January 11th from 7pm-9pm. All participants are asked to have a 1-2 minute monologue prepared and memorized for the audition.

For details about the characters, check out our Auditions page.

We will be following the safety guidelines where you will have your temperature checked and you are asked to wear a mask and social distance when not auditioning for the show. We will not have more than 50 people in a setting. You will check in at the Box office, and auditions will be held on the Strauss Mainstage.

The Hard-Working Cast and Crew

The talented cast of A Christmas Carol consists of a diverse and joyous mix of people in our community.  We are ecstatic to see a great mix of new faces and Strauss veterans in this production both onstage and behind the scenes.  Weeks of rehearsal go into learning lines and blocking for any show, but this cast knocked it out of the park with their dedication, positive attitudes, and genuine excitement to bring theatre into our lives once again.  Matt Wilkins, the director, brings out the magic in the message of A Christmas Carol thanks to his diligence and hands-on work in every aspect of the  production.

One of the many reasons we chose to produce A Christmas Carol this season was to bring joy and hope to the community.  We understand this year has been tough for many, if not all, of us.  The story and message that A Christmas Carol brings is a familiar, heart-warming one that really resonates every Christmas.  We are thrilled to be able to bring it into your home.

We are very thankful to David Kaul for providing us with his masterpiece of a set.  Fans of the annual productions at Family Church may recognize it.  We are appreciative of his hard work because it looks absolutely beautiful.  We cannot wait for you to see it!

Now that Tiger King and The Queen’s Gambit are cleared from your Netflix watchlist, it’s time to shake it up!  Our production of A Christmas Carol is a show for all ages to enjoy.  Whether you’re as old as Scrooge or as young as Tiny Tim, you will love Matt Wilkins’ adaptation of the classic tale.  We’re so thankful that we were able to record the show to present to our members, community, friends, and family from the safety and comfort of their own homes.  Now you can experience theatre in your Grinch onesie while drinking hot chocolate and munching on sugar cookies; at least that’s how I’ll be enjoying it.

As always, a huge shout out and thank you to all our volunteers for their time and the patrons and members who made this show possible.  We’d also like to thank our sponsors – Lazenby & Associates, Monroe West Monroe Convention and Visitors Bureau, and ARCO.  We could not have done this without your support!

Purchase your ticket to view A Christmas Carol, streaming on our website today!  Call the box office at 318.323.6681 or visit the Tickets page of the site.

My name is Gabby Ballew, and I am a junior Communications major at ULM. I work at Newk’s Eatery as a Certified Trainer. Some of my favorite hobbies include singing, playing my guitar, and playing the piano. I also like to make covers of songs that I like. I have been in 3 shows outside of Strauss. These shows include High School Musical (2015) and Little Shop of Horrors (2017 at West Monroe High School and The Phantom of the Opera at ULM (2019). This is my debut at Strauss, and I hope there are more shows in the future. I would like to say thank you to my family and friends for believing in me and supporting me through thick and thin. I would like to give a special thank you to my brother Peyton for convincing me to be in the show and for being proud of me and supporting me throughout the show. “A merry Christmas to you all.”

Watch Gabby in A Christmas Carol streaming December 21-January 1. For tickets and information, call Donna at the box office at 318-323-6681 or go online at StraussTC.com.

My name is Emmanuel Capers, I am 25 years old. I have a bachelors in Arts and Humanities from the University of Louisiana at Monroe. I have performed in many operas, concerts and musicals at ULM and the Strauss Theatre. My most recent performance at Strauss was Godspell under the direction of Terri Cunningham. I am excited and honored to be a part of A Christmas Carol this year!

Director’s Note: I saw Emmanuel in Godspell and was excited to have him join our cast. The man is very talented, and I’ve had the pleasure of getting to know him better over the past few weeks with this show. Only regret is that I didn’t get to know him sooner, he’s a great guy!

Watch Emmanuel in A Christmas Carol streaming December 21-January 1. For tickets and information, call Donna at the box office at 318-323-6681 or go online at StraussTC.com.

Oz Wilkins is a student at Geneva Academy. His hobbies are whiffle ball, plate stacking and slug slinging. This is his first show at the Strauss and one of the highlights of his year.

Director’s Note: Oz has had to fill in as both the Carol Boy and Boy Scrooge in this show. A tall order for any first time actor but he’s done the job well and I’m happy to have him as past of the cast.

Watch Oz as the Carol Boy & Boy Scrooge in A Christmas Carol streaming December 21-January 1. For tickets and information, call Donna at the box office at 318-323-6681 or go online at StraussTC.com.