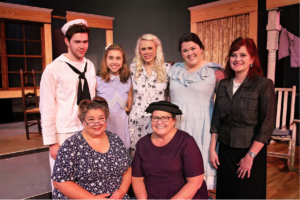 What a great audience dress last night for The Cover of Life!  There are only seven in my cast, so we had a relatively small turn out.  But that didn’t stop my cast from giving all they had.  The audience loved them!  At intermission, many said they were taken in by the story from the beginning and couldn’t wait for Act II!  It is so satisfying for me as director to see the growth of each actor from six weeks ago.  Transforming from just saying lines to becoming their character is our ultimate goal, and they have arrived at that point, I’m proud to say.

What is such fun for me is to see them add little touches of reality in each scene as time in the rehearsal process went on.  So by the time our first audience joined us, they were completely ready to give them a great performance!

Don’t miss this poignant story of our play.  Coupled with our strong characters, this play is the kind of play you’ll think about on the way home and beyond.