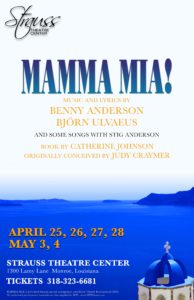 Since its original opening in London in 1999, Mamma Mia! has thrilled audiences world wide; an estimated 55 million fans have seen professional productions; then there is the movie, soon to be followed by its sequel.

ABBA’s hits tell the hilarious story of a young woman’s search for her birth father. This sunny and funny tale unfolds on a Greek island paradise, where on the eve of her wedding, a daughter’s quest to discover the identity of her father brings three men from her mother’s past back to the island they last visited 20 years ago.

The story-telling magic of ABBA’s timeless songs propels this enchanting tale of love, laughter, and friendship, creating an unforgettable show. A large cast, non-stop laughs, and explosive dance numbers combine to make Mamma Mia! a guaranteed smash hit for Strauss. A mother, a daughter, and three possible dads all lead to a trip down the aisle you’ll never forget!

Mamma Mia! the ultimate feel-good show!  Strauss Theatre Center is very pleased to have been one of the first truly community theatres granted the rights to produce this crowd-pleaser, and on the first day of availability.

Strauss Theatre Appreciates our Sponsors for this show!