Murder at Café Noir  presents a gleefully silly sendup of those classic suspense mysteries starring tough guys like Humphrey Bogart or Robert Mitchum. The depth of the mystery is hardly the point; it’s the characterizations, over the top as they are, that make this murder most fun. 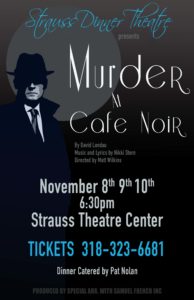 This forties detective story come to life features Rick Archer, P.I., out to find a curvaceous runaway on the forgotten island of Mustique, a place stuck in a black and white era. The owner of the Cafe Noir has washed ashore, murdered, and Rick’s quarry was the last person seen with him. He employs his hard boiled talents to find the killer. Was it the French madame and club manager, the voodoo priestess, the shyster British attorney, the black marketeer or the femme fatale? The audience votes twice on what they want Rick to do next and these decisions change the flow of this comic tribute to the Bogart era.

This Dinner Theatre production is a separate offering from our season membership.  Tickets can be purchased at our Box Office – 323-6681.

PLEASE ARRIVE EARLY! Please arrive at least 30 minutes prior to your scheduled performance to allow time to park. Friendly ushers will assist latecomers to a seat at an appropriate moment at the discretion of the theatre.

“It’s as close as you’ll ever get to stepping into Bogey’s shoes at the Blue Parrot.”
– Boston Herald