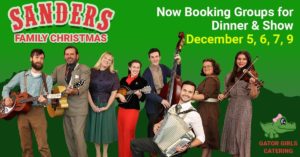 From the authors of “Smoke on the Mountain,” Strauss Dinner Theatre presents “Sanders Family Christmas” on December 5, 6, 7 and 9.

They’re back! The Sanctified Sanders Family Singers return to Strauss Dinner Theatre to celebrate the holidays with faith, family and old-fashioned fun in SANDERS FAMILY CHRISTMAS.

SYNOPSIS
It’s Christmas Eve in 1941. The Depression is coming to a close, but 18 days after the attack on Pearl Harbor, the threat of war has just begun. Our SMOKE ON THE MOUNTAIN family has returned, about to say a bittersweet goodbye to their only son, who is shipping out with the Marine Corps. But before he goes, the Sanders Family Singers are heading up the annual Christmas celebration at Mount Pleasant Baptist Church. Reverend Mervin Oglethorpe (who works part-time at the local pickle plant) and the Sanders family attempt to raise the spirits of their faithful flock (the audience!) in a rousing, hilarious and heart-warming Christmas gospel sing-along of cherished holiday hymns and carols. There’s Uncle Stanley; the family’s patriarch, Burl and his Scripture-quoting wife Vera; the twins Dennis and Denise and their sister June (she doesn’t sing, she signs).

Conceived by Alan Bailey and written by Connie Ray, SANDERS FAMILY CHRISTMAS is a nostalgic musical comedy that follows the saga of SMOKE ON THE MOUNTAIN, one of the most loved and most produced musicals worldwide.

Sanders Family Christmas is a heartfelt evocation of simpler, earlier times that somehow ring so resoundingly true and relevant in the 21st Century. – Broadway World

“But even if you’ve never met the Sanders, you’ve heard their music. And most of their jokes. There’s comfort in that familiarity, something especially welcome at holiday time.” – City Beat

“Definitely a feel-good and fitting event for the holiday season..”  – Gold Star