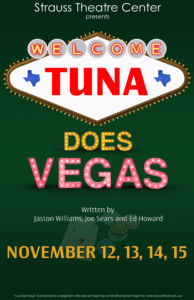 First, there was Greater Tuna, followed by Tuna Christmas and Red, White and Tuna.  Now–Tuna Does Vegas re-unites the lovable and eccentric characters from the ‘third smallest town in Texas’ as they take a rambling romp in Sin City. The hilarity begins when oddball-conservative radio host Arles Struvie announces on air that he and his wife Bertha Bumiller are heading to Vegas to renew their wedding vows…but it seems everyone in Tuna, Texas, goes along for the ride!
Tuna Does Vegas is a hilarious satire that highlights small-town life and attitudes.  The eclectic and eccentric citizens that make up this town are portrayed by only two actors, making this send-up on life in rural America even more delightful as they depict all of the inhabitants of Tuna — men, women, as well as Vegas showgirls, Elvis impersonators and more!
Naturally, before writing the script, Sears and Williams spent some time in Vegas — purely for research, of course.  “Vegas sets you up for great satire,” Sears says. “I’ve seen those Baptists in Vegas, feeding the slot machines as fast as they can. Where else can you find a church with a new Hooters right across the street?”
Of the handful of new characters not from Tuna, the duo’s favorites seem to be worldly hotel manager Anna Conda, and Shot, the security guard whose claim to fame is having been shot in the posterior by Frank Sinatra.
“We developed these characters over the years, improvising at parties,” Williams says. “We’re delighted this show gave us a place to use them.”