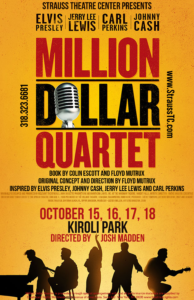 The Million Dollar Quartet recounts what happened during an overcast afternoon in Memphis on Dec. 4, 1956 when four young performers–Elvis Presley, Jerry Lee Lewis, Carl Perkins, and Johnny Cash participated in a star-studded jam session at Sam Phillips’ Sun Records in Memphis.  Perkins was there for a session with several backup players, one of them the yet to be famous Jerry Lee Lewis. During the session, Johnny Cash dropped by to listen, and then Elvis Presley stopped by to say hello to Sam Phillips, who had earlier had him under contract. And, of course, everybody started singing for an hour or two.
Sam Phillips and his engineer realized that this was a special session: the engineer kept the tape running and Sam phoned a reporter friend, who ran a story the next day on the session: “This quartet could sell a million.” Shortly after they were known as “The Million Dollar Quartet.”  The so-called Million Dollar Quartet became legendary over the next few decades, not because of what they were on that day, but because of what they all became over the next 20 years.
This Tony-nominated show captures the contagious spirit, freewheeling excitement, and thrilling sounds of the once-in-a-lifetime event where four of music’s best talents came together.

Season members can join online streaming using a password which will be made available 1 week prior to streaming performance.
More more information, call the theatre box-office at 318-323-6681.