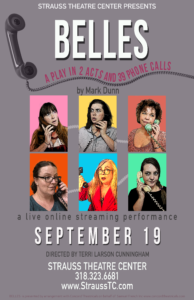 Strauss Theatre Center has embarked on a new venture:  the internet.
As Strauss approaches its 10th decade of  continuous year of entertainment to the greater Monroe community, the global crisis has forced the theatre to look to alternative ways to keep working.
Belles:  A Play in two acts and 39 phone calls, written by Mark Dunn, will be fully staged and presented online.  Director Terri Larson Cunningham says Belles is the first of its kind for Strauss.  “Most of our rehearsals were via Zoom and Facebook.  When we have met in person, each cast member is socially distanced. We are breaking new ground and happy to do so to keep our beloved theatre going.”
Belles takes place in the 1980s and centers around the six “very Southern” Walker sisters dealing with unhappy childhood memories and an aging mother.  Only the eldest sister still lives in Memphis; the others have ‘escaped’to other parts of the country.  More than physical distance, the sisters find themselves emotionally distanced as well.
“We have 6 of the area’s most talented actors breathing life into the characters.  Each has her own strengths and weaknesses and varying memories of a difficult childhood” Cunningham said.  “You’ll laugh; you’ll cry.  But most of all, you will witness first rate performances.”
The cast consists of:  Jean Hartzog, Wendy Wilson, Moira O’Connor, Cassey Bernstein,  Nicole Goode and Megan Wilkins.  Stage Manager/Assistant is Taylor Micheils and Scot Baronet is technical and set designer.

Season members can join online streaming using a BELLES password which will be made available 1 week prior to streaming performance.
More more information, call the theatre box-office at 318-323-6681.